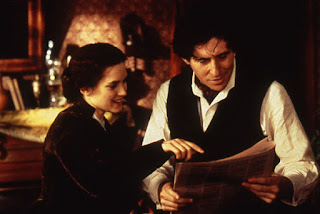 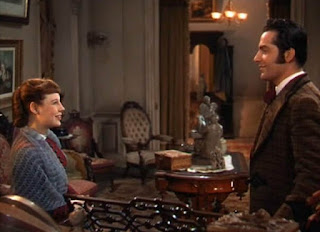 I am finally cranking this out as this subject has been bothering me something fierce this year. With Greta Gerwig's interpretation of the story just around the corner (a version I am leery of, to say the least) I figured this would be the perfect time to share my thoughts on this matter. This comes from me not only as a life-long fan of Little Women and a real-life Jo March myself, but also as a real-life Jo March that did indeed marry a real-life Friedrich Bhaer...or at least a guy very similar.

Disclaimer: I am only addressing the story of Little Women, not any of the subsequent books.  Little Women at its core is a standalone story and it never warranted a sequel. So if you plan on firing back at me with stuff that happens in the other books, don't bother. This is about Little Women as a one and done story, which I believe it it is and should remain so. (Kind of like The Matrix or Pirates of the Caribbean should have. *facepalm*)

This post spawned from being bombarded this year on social media by an alarming amount of Friedrich Bhaer hate. I was, honestly, quite surprised by this as I have always loved their relationship and Alcott's story choice feels natural to me. Whether it was people believing Jo should have ended up with Laurie, or people who wanted her to fly solo, or people who labeled her relationship with Bhaer as "patriarchal" or "creepy" due to his age difference and personality, there was plenty of spew to go around.

To me, Jo and Laurie are like dynamite, and not in a good way. It made sense to be that she refused him martially. He is better off with Amy, a partner he also has good chemistry with and who actually wants the lifestyle he leads.

As for Jo flying solo, that would have been alright. However, we need to get over this concept as a modern society that having a romance or a marriage weakens a woman. Or that a single woman is more empowered than one in a committed romantic relationship. We're about to see this come to pass in the latest Star Wars film (I've already called it), but so many stories of late intentionally favor the solo woman. This can be a good thing, not everything has to be a romance and some people are better off single, but the heart behind this growing trend is what I take issue with. Our collective disdain for the traditional romance has spread like a disease and we aren't even thinking critically about it. But I digress...

Even more baffling to me is this issue people have with age differences. In our supposedly progressive society we can accept/encourage all kinds of coupling, but if two consenting adults have an age difference--especially if the man is the elder--we act appalled. Where did this stigma come from? Men dating women much younger than them are labeled creepers and perverts. Do we really not consider than a woman might, I don't know, actually like them and want to date them? Likewise, there's a double standard too. An older woman may get called a "Cougar" for dating younger, but she's typically seen as empowered and going after what she wants, while men her age dating younger are just seen as old perverts. It makes no sense and it is very damaging to society. As long as everyone involved is a consenting adult and wants to be together, what's the fuss? 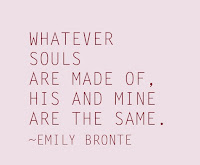 On this I can speak from personal experience. Not only are some of my favorite fictional couples and crushes older men with younger women, but I married that way myself. Friedrich Bhaer was about 15 years older than Jo March, Mr. Knightley was 16 years older than Emma, Mr. Rochester 20 years older than Jane Eyre, and my own Mr. Johnson is 18 years older than me. Marrying older definitely comes with a few challenges or things to consider, but if your souls are made of the same stuff, all the rest can be dealt with from a place of strength. My marriage definitely has its share of challenges, but the age difference in and of itself is not one of them.

I have always been attracted to older men. My first crush wasn't the dopey kid sitting next to me picking his nose in school, it was Han Solo, Indiana Jones, Madmartagan, and all the period piece drama heroes. I don't think I'm weird or have a fetish simply for being attracted to older men, and I find most celebrities look sexier a little more seasoned than they do in their youth. Robert Downey Jr. is a great example of this. If you ask me, his face got more handsome with a little scruff a few fine lines haha. All this being said, I would encourage women to not write off potential suitors simply because of an age difference. If you find them interesting or attractive, give them a chance and see where it goes. I say with confidence that you will likely be surprised.

Rounding back to Jo and Fritz (as he's also referred to). Some other arguments against him are that he is too patriarchal and critical of her. Again, I am only going to reference Little Women, but I think a lot of the criticisms he gave her were warranted, and he did not offer them unsolicited. She gave him her work to read and asked his opinion. He was even hesitant to give it at first, though he had passionate feelings about it.  As most of you know, I am a writer as well, and my own Professor Bhaer has read and critiqued my work. He is very honest if he thinks something doesn't work or could be better. I'm still my own person and I don't always make the changes he suggests, but I'd rather he give me the truth than sugarcoat it just to make me feel better. Offering constructive criticisms, even harsh ones, shows an interest in you as a creator and a desire to see your work be the best it can be. I believe the same for Jo and Bhaer.

Jo also saw beautiful qualities in Fritz's character even before they ever started speaking. I had the same experience with my own husband too... 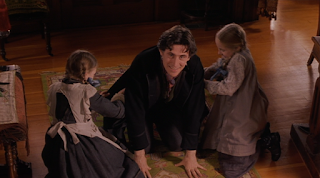 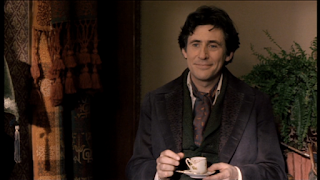 Professor Bhaer was there while he arranged his books. I took a good look at him. A regular German rather stout, with brown hair tumbled all over his head, bushy beard, droll nose, the kindest eyes I ever saw and a splendid big voice that does one´s ears good, after our sharp or slipshod American gabble. His clothes were rusty, his hands were large and he hadn´t a handsome feature in his face, except his beautiful teeth, yet I liked him, for he had fine head, his linen was spandy nice, and he looked like a gentleman. (Jo's entry chapter 33)

Why everybody liked him was what puzzled Jo, at first. He was neither rich nor great, young nor handsome, in no respect what is called fascinating, imposing, or brilliant, and yet he was as attractive as a genial fire, and people seemed to gather about him as naturally as about a warm hearth. He was poor, yet always appeared to be giving something away; a stranger, yet everyone was his friend; no longer young, but as happy-hearted as a boy; plain and peculiar, yet his face looked beautiful to many, and his oddities were freely forgiven for his sake. Jo often watched him, trying to discover the charm, and at last decided that it was benevolence which worked the miracle.
​
- quotes from Little Women 1868

In my two favorite screen versions (1949 and 1994), Jo sees his tenderness right away when he plays with the children of the building owner where she and Friedrich rent their rooms. The very same children Jo will be taking care of as a day job while she pursues her writing. Right off the bat, she is witness to a sweetness and humility that not a lot of men dared to show back then. Additionally, it was to financially support his orphaned nephews that he even left his homeland of Germany in the first place. 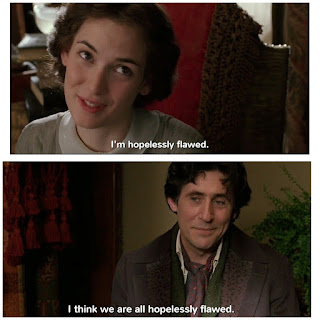 I particularly love Gabriel Byrne's performance. I think he really showed all the angles of Bhaer's character. This includes that tenderness in moments where he brings Jo a tea tray and a kiss on the cheek, or in his subtly smoldering sensuality as he translates the romantic play they're watching and they kiss on the balcony of the theater stage. Yet, even in the books, he saw Jo right where she was, exactly as she was. Even if he didn't love her murderous vampire stories, he still loved her writing and saw her abundant potential--potential even she herself wasn't certain of at the time.  Love doesn't mean you like the same things all the time or don't ever have critiques toward the other person. Love is being honest in all things and seeing the whole truth of a person. This is something I admittedly have learned the hard way in my own love story. "We are all hopelessly flawed."

I will end with one final idea on why Jo and Fritz are an ideal pair...they complement each other. Jo is outward, impulsive, and even brash at times. She loves everything and wants to soak in the world. This is one of the many things about her I can completely empathize with. In Laurie, she found a friend whom she could commiserate with about droll life and wanting more, but that's about as far as it realistically would go. As I said earlier, they are like dynamite. They share passion, but little patience and forbearance in their relationship. Chemistry is good, but it must be chemistry that yields a viable result. Amy can handle Laurie in ways Jo never could. Bhaer can handle Jo in ways Laurie never could. Bhaer is patient, quiet, feeling, tender, and passionate in a behind-the-scenes way. His inward steadiness and her outward explosive nature are great at bringing a balance in each other.

The scene that best reveals this to me is in the 1949 version when Jo and Fritz return from the opera. She's like a wild balloon, he's like a tether, and they are perfect together...

Anyway, thanks for indulging me in this. I just wanted to weigh in on this anti-Bhaer/anti-older men/anti-romance conversation that has been happening in the backdrop of our social media and especially in arts & entertainment. I will probably add more things about this subject in the future, since it is of great importance to me on many levels. For now, I will leave you with this image of a man gazing at a woman in admiration of who she is and all she has. Ultimately, mutual admiration and adoration are what bring two people together and they are timeless as well as ageless. 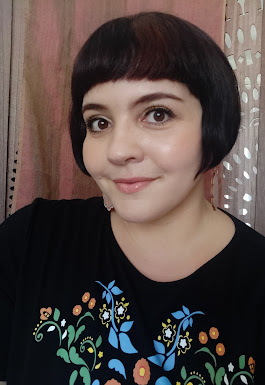